Drivel from Liberals. I really hate when Liberals are wrong. It ticks me off when good people assert ridiculous things, even when they should know better. Keith Olbermann and crew on the MSNBC show Countdown now and then follow their passions into a ditch. One such instance happened in the show of Friday, April 10th (hosted by David Shuster rather than Keith Olbermann, for whatever reason).
+
At one point Shuster reads text that first concedes that (were global warming to occur), the growing season would be longer, but then he seeks to undercut that fact with an absurdist bit of propaganda. The text he reads expressly calls into question what he then goes on to say anyway, namely, "the advocacy group Environment America" — note that wording: "advocacy group"; not scientific organization or academic study group; "advocacy group" — says that the "optimum temperature" for growing corn is 64 to 72°, so global warming that pushes the temperature over 72 degrees will have "an overall negative effect on corn crops" of $1.4 billion every year. Oh?
+
Let's look at the facts, from a website called "Frequently Asked Questions about Corn in Iowa" from iowacorn.org.

Iowa has produced the largest corn crop of any state for each of the past 14 years. In an average year, Iowa produces more corn than most whole countries. For example, Iowa grows three times as much corn as a country like Argentina.

The usual growing season for corn in Iowa is from April to September, and harvest is typically in September or October. Here is the typical weather in Iowa's capital, Des Moines, for the entire year. 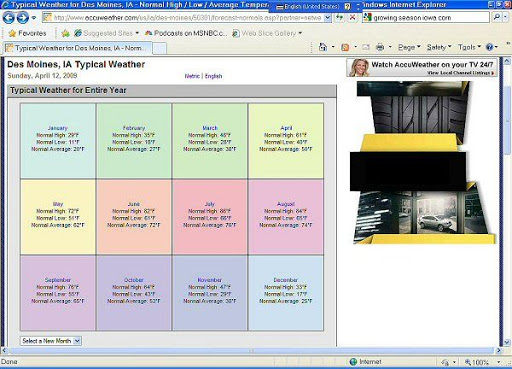 Note that April is 14° below the "optimum temperature" stated on MSNBC. May is 2° cooler; July and August are above. If you count only daytime temperatures, the temperatures are far higher than 72 in June, July, August, and September, and far below the asserted "optimum" in April. So of the 7 months of Iowa's corn-growing season, temperatures are outside the "optimum" range, but Iowa still produces more corn than any other state and many entire countries.
+
What this all comes down to is that talking about "optimum" temperatures for corn is nonsense, because the actual temperatures in the largest corn-growing area vary far below and far above the asserted "optimum", and there are already hybrid seeds for cooler and hotter areas. If temperatures rise as a regular thing, the agricultural scientists will produce varietal seed that accommodates to higher temperatures.
+
Anyone who grows plants, even indoors, knows that temperature is not the only factor of importance. Water and soil are at least as important to plant growth. So even if we have no control over temperature — and we have none — we might have control over water, even over large areas, and we definitely have control over the nutrient levels and structure of soils.
+
In short, the assertion that a longer growing season will result in a loss in corn is IDIOCY; contrived nonsense put forward in bad faith by people so eager to make a debating point that they go beyond truth to contemptible absurdity. And Countdown followed them over the cliff.
+
(The current U.S. military death toll in Iraq, according to the website "Iraq Coalition Casualties", is 4,271 — for Israel.)
- posted by L. Craig Schoonmaker @ 11:59 PM